Carbon nanotubes are cylindrical, beehive-shaped structures that are chemically related to graphite. The beehive structure of the nanotube is formed with hexagonal rings of carbon, and contains a “cap” at the end of each cylinder (Adams.) The length- diameter ratio of a nanotube has known to be incredibly large, with the length being millions of times larger than the diameter.

Even though nanotubes are extremely light and tiny, they have been known to be hundred times as strong as steel. This unique strength is due to the covalent bonds that form within the carbon atoms in a single tube. Nanotubes are entirely composed of sp2 bonds, which are even stronger than the sp3 bonds found in diamond. Individual nanotubes naturally align themselves into “ropes” due to the weak Van der Waal Forces that form between tubes.  Van der Waal forces also allow for the rolling up of nanotubes, rather than individual sheets.

Nanotubes can merge together if put under high pressure. In this case, some sp2 bonds will trade for sp3 bonds, and produce strong wires in unlimited length (Wylie). 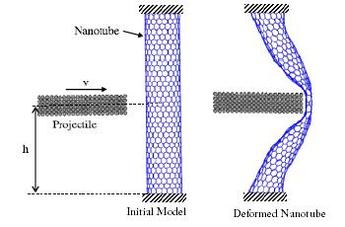 Carbon nanotubes are light, flexible, thermally stabile, chemically inert, and extremely strong- making them ideal for bulletproof technology (Adams). In a bulletproof vest, millions of carbon nanotubes make up carbon nanofibres, which are woven together to create an extremely lightweight material (Paneer, et al). The carbon nanofibres are extremely good at absorbing energy. Their capacity to absorb this energy and not permanently deform or fail is the reason that carbon nanotubes are ideal for the purpose of a bulletproof vest (Paneer, et al). The high elasticity module of carbon nanotubes is also a major reason why researchers are focusing on using it as bulletproof material. A team from the Centre for Advanced Materials Technology at the University of Sydney have recently developed a new material that is actually capable of rebounding the force of a bullet (Mylvaganam, et al).

Single-walled nanotubes (SWNTs) are preferred over the multi-walled nanotubes for the purpose of manufacturing bullet proof vests. SWNTs are composed of a single rolled graphene sheet. Kausala Mylvaganam and L C Zhang from the Centre for Advanced Materials Technology at the University of Sydney conducted a study on the ballistic resistance capacity of different carbon nanotubes. Their studies showed that nanotubes with larger radii could withstand higher bullet speeds, and nanotubes with larger lengths could absorb more energy. They also found that the energy absorption and rebound is highest when the bullet hits the middle of the nanotubes (Mylvaganam, et al). 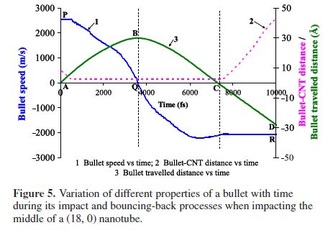 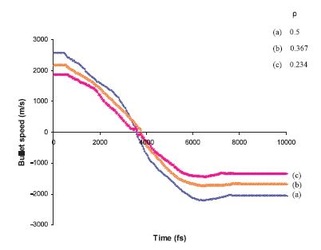 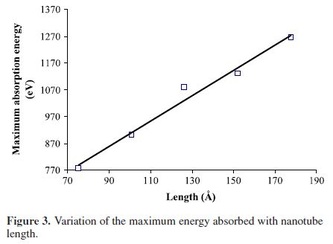 Carbon nanotubes hold a very promising future for technology being developed in the study of Ballistics. There is no doubt that future generations involved in law enforcement and the military will benefit from nanotechnology.

Amendment II Ballistic Armor is a company that has already commercialized their own carbon nanotube bulletproof vest: